Dear blog and readers,
I think it's come time for me to shut down this blog. I won't delete it, but I need to concentrate on school and other things, and I just don't have time to effectively write or blog anymore. Also, since coming back from Chile and not having a computer or regular internet access there, I found out what being "in it" was like, all the time, not just the times that I wasn't online. Yes, I found a lot of awesome people through my blog and ravelry, people I still want to keep up with, but right now, I feel it's an extra pressure I can't deal with right now.

I shut down my etsy shop, and I've been cutting down my time on the computer in general. Upcoming in this semester I need to write about 20-30 pages to finish up the next four weeks. This summer, my plans include working about full time and going to the beach all the time.

I'll still be active on Ravelry. I might post occasionally on my Tumblr. It's just hard keeping up with a full on blog as a student with a social life, trying to get a 3.6 GPA and work. Please if anyone has any questions about patterns or anything email me at SamDOTedgeATsbcgobalDOTnet (replace every word with symbols!).
Posted by Ibunnysavetroy at 4:42 PM 27 comments: 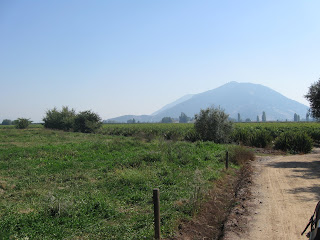 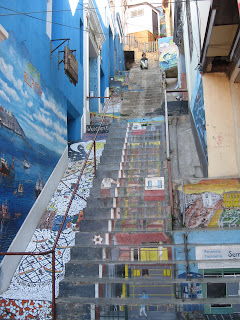 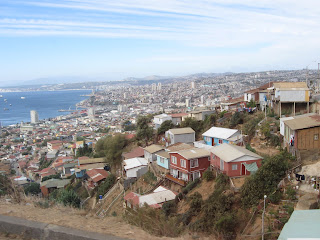 Posted by Ibunnysavetroy at 5:18 PM 8 comments:

Leaving On a Jet Plane Pt 2, with FOs

Today I'm leaving for Chile. I'll be back the 29th of March. I'm so excited. We're meeting at the school in a couple hours and then driving to the airport - a flight to Alanta then to Santiago! I think we will have wifi, but I don't know if I'll blog. I might blog a bit here, because there's an ipod touch app for tumblr! 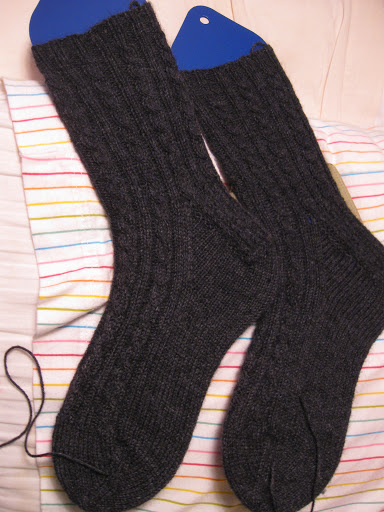 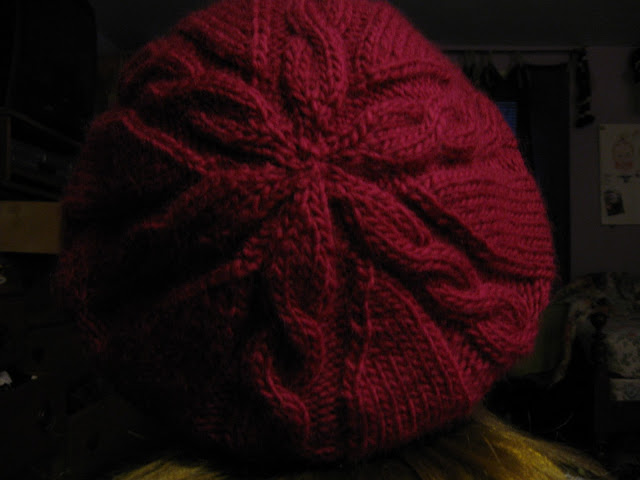 I don't think I'll have a lot of knitting time, but I am bringing yarn for 3 pairs of socks. It's small yarn! Also, bringing some crochet hooks in case my needles are confiscated!
I'll take a lot of pictures and update when I get home!
Posted by Ibunnysavetroy at 8:41 AM 5 comments:

Leaving On a Jet Plane 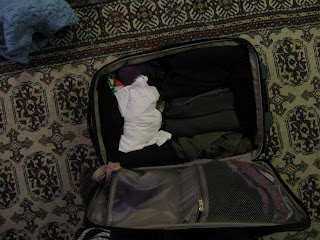 My almost fully packed suitcase.
(Yes it is tiny....I've come to terms with that)
I have not spun in .... 4 months? I did start spinning some white merino, and then stopped about a month ago. I like to spin. I just stopped doing it. I think the reason is that with knitting or reading or writing (Even for school!) it's a rather passive activity. I can sit on my bed or the couch and do anything of those things while reclining back. Spinning I need to sit straight with my feet on the floor, and my bed is too high for that. I think crafts that are more "lazy" I'm more likely to do! My parents just bought a new couch (to be specific, my dad's away on business, but has consulted with my mother throughout the couch buying process), for upstairs, so maybe my wheel can live up there and I can use it upstairs? We'll see.

For those still interested, I'm still posting on my Tumblr. A little more often than here, it's going to be more of a personal blog than anything.

I know I've mentioned it before, but I think I'll explain about Chile. I'm in a class in my university which is taught throughout the semester but as part of the class, we go to Chile during spring break. So in less than two weeks, I'm headed out! There's about 16 of us going on the trip, and we'll be spending about 4 days in Santiago, 4 days in Chepica with host families and then another 4 days in Santiago. We'll actually be there the same time as Obama. Because of his trip, we're going to La Moneda Palace the day we get off the plane. It'll be interesting to get off the plane the same day and jump into nicer clothes to go to the La Moneda.

I will definitely take tons of pictures and post about my trip when I get back! I'm not planning on knitting a lot but I'm going to bring a couple projects. One unstarted for the plane as well as some cotton and crochet hook if they take the needles away!

Also, all this stuff: 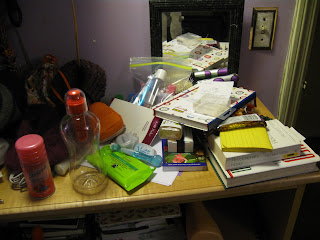 Needs to be packed, as well as dealing with an almost full week at school! Wish me luck!
Posted by Ibunnysavetroy at 7:23 PM 5 comments:

First, before the FO, some sad but hopefully temporary news. I'm a student, and I work. I'm taking six classes, one studio painting class. Because of these things, I'd had to shut down my Etsy shop. I hope this is temporary, and I can reopen when I have more time in the summer, but I'm not promising anything. I'm sorry to the people that were waiting for me to start sewing again.

In more happy news, I finished some socks! These are for my sister. She likes orange! 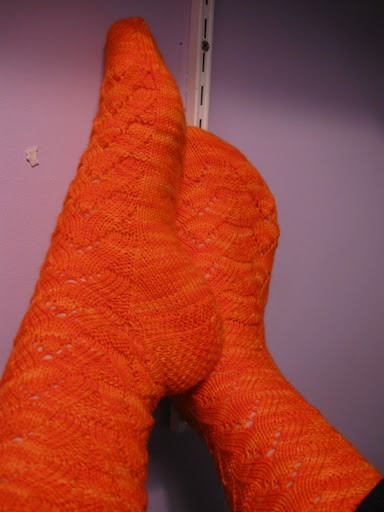 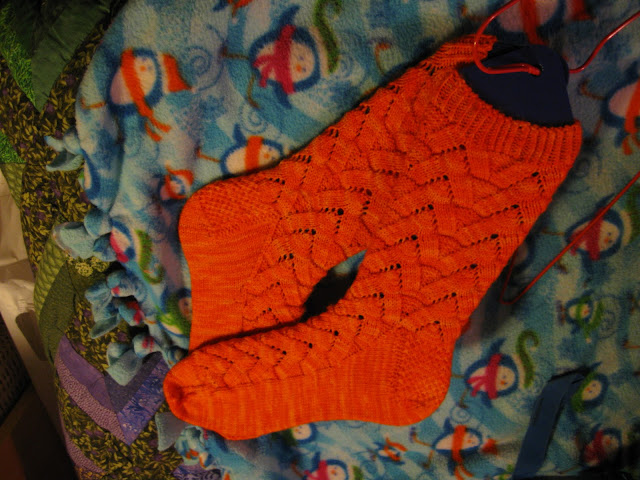 My parents got me these sock blockers for christmas! How awesome are they? I liked that with the monkey pattern, it nicely blocked out the lace.

I also started another pair of socks from Cookie A's book, Knit. Sock. Love. I started the Wedge socks for my brother. I'm loving them. 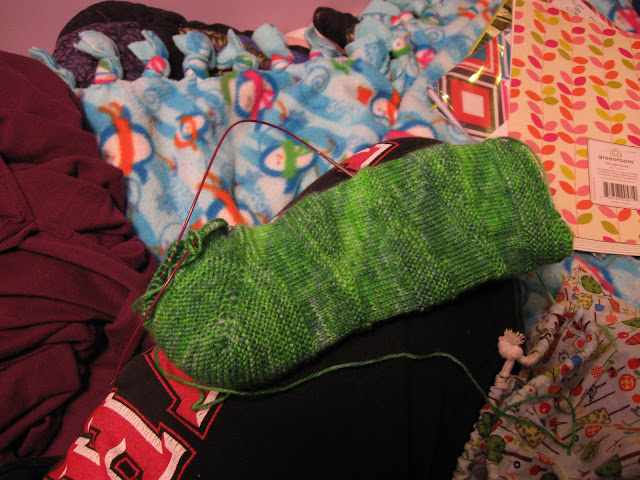 Very interesting wedge/short row construction so not boring to knit but not too hard for class or TV knitting. Interesting heel too!
Posted by Ibunnysavetroy at 8:16 PM 6 comments:

My blog anniversary was Friday! I meant to post but I just became too lazy. This little blog is four years old!

I also finished my cowl! 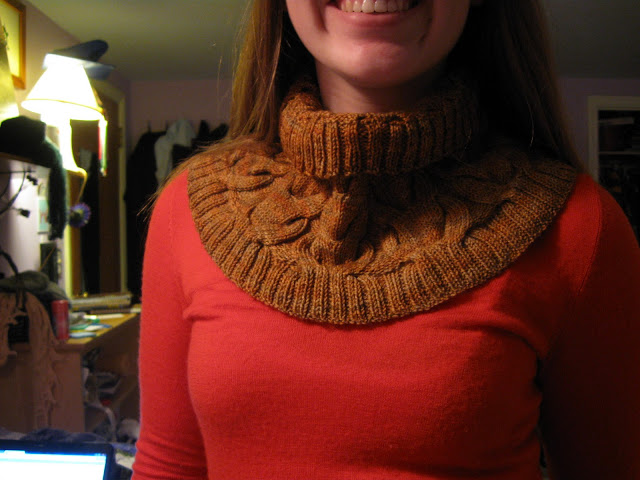 Pattern: Sugar and Creme Cowl
Needles: Size 5
Yarn: Madtosh Sock yarn in Ginger... yes, the same as the original version. I HAD to!

What I would do if I knit it again (planning to, mom loves mine!): I would not knit a bit of extra ribbing at the top like I did on this one. I will go down a couple needle sizes on the ribbing so it doesn't want to fold over. I like how it looks though! 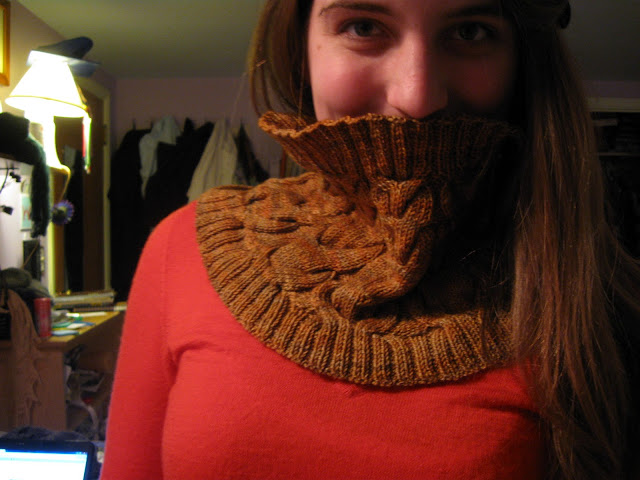 Posted by Ibunnysavetroy at 4:21 PM 2 comments:

A lot of things have happened this week.
A couple big personal things, so I'm not going to talk about them for a while.
As for knitting, I finished a cowl. I'm waiting for it to dry.
I'm leaving for Chile in a couple (3?) weeks and I'm really excited. It'll be a nice distraction. I'm like going crazy looking for solid alternatives to liquids like shampoo, etc because we're not checking luggage. So I bought solid shampoo from an etsy seller. I'm really impressed with it. It lathered up really easily but it did make my hair feel odd and I did have to rinse it with vinegar but I've read that eventually your hair gets used it.

I've bought a lot of things for this trip, and I'm not even two weeks away! I'm still planning on making at least one skirt (we have to wear pants even though it's going to be warm because we'll stick out like sore thumbs otherwise!). I bought Tom's Classic shoes, which I've been planning on for a while but when I realized I had no walking shoes? I had to buy them, and I bought a pair of walking brown sneakers as well.

The sneakers I've owned a pair in the past and I wore them to Europe when I visited with my grandfather in high school. I think we got them when I was about 13, and I still had them when I was 17. Holes and all, I loved them. Cute, but still had support and not too stiff so you don't get blisters when you break them in. I normally wear boots, flats or sandals, I rarely wear sneakers. I don't run in these, but really, it takes a lot for me to like a shoe. Also, they are not unfriendly to the wide footed people. I have wide feet that are not wide enough for wide size, so these are perfect. My new pair is good so far, I wore them two days and it was nice to not be walking flat on the ground like I normally am with boots or flats in the winter!

As for the Toms, I cannot speak for them personally, but I have a friend and her and her boyfriend love them. I think they're both on the second pair of them. My friend actually wore threw the fabric of the toe rather fast, and when she called Tom's replaced them for her! 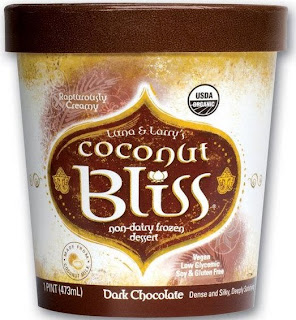 Another thing is that I discovered this ice cream. I bought it at whole foods but I'm hoping to find it in my local Stop and Shop (which has a natural foods section). I'm lactose intolerant, as well has being allergic to Lactaid pills, so I have few options when it comes to ice cream. This coconut stuff? It was so good. It was not low fat in any way but it had a handful of ingredients - and get this - I could read and pronounce ALL of them(I got the dark chocolate flavor). And if you're on a "no processed sugar diet" it fits into it, with only agave syrup as sweetener. Obviously, it tastes like coconut milk, so if you're not a fan, I couldn't suggest it. But it's heaven for a coconut lover/non-dairy consumer. It wasn't cheap but, for the occasional treat it would be fine.

I didn't really mean to review things in this post but I guess that's what it turned into? I think I will try to post this weekend about knitting! I'm hoping to sew but I'm making no promises! And just so everyone knows, I bought all this stuff myself and I'm getting no kickbacks from the companies/sellers!
Posted by Ibunnysavetroy at 4:43 PM 1 comment:

Ibunnysavetroy
My name is Samantha, I'm in college. I work and go to school, and I'm an anthropology major. My ravelry id is Ibunnysavetroy. Feel free to friend me! I currently work at in the criminology department at school!